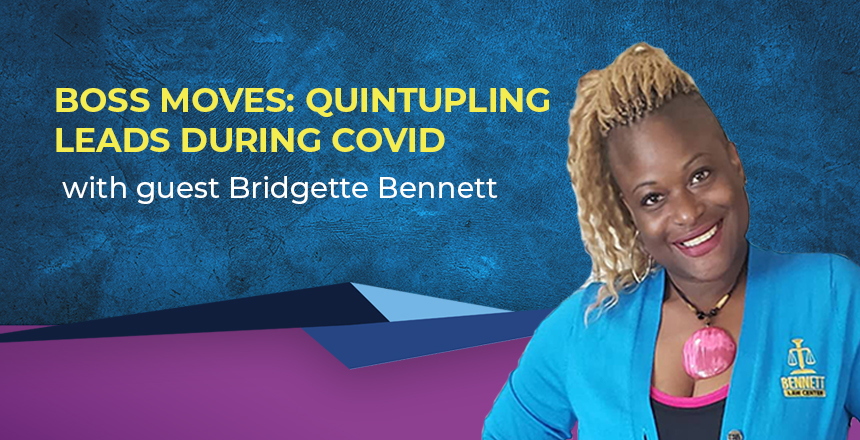 In the time of COVID-19, countless business owners have pivoted from operating their businesses out of traditional brick and mortar locations to operating primarily online. While many businesses have made this transition to best serve their customers during these uncertain times, Law Firm Mentor client Bridgette Bennett excelled by following our advice by implementing very specific and strategic tactics online. These systems allowed Bridgette to continuing operating her business and gain more leads using non-traditional marketing strategy.  Many of these strategies have been outlined in our LFM Accelerator Course.

In this episode, Bridgette and I discuss what she did to 5X her law firm leads in ONE WEEK through use of these non-conventional strategies.

In this episode we discuss:

Bridgette Bennett is the attorney and sole owner of the Bennett Law Center in Groveland Florida. She has a solo practice that focuses exclusively on immigration and nationality law. She graduated from Barry University Dwayne O. Andreas School of Law in May 2011 and was admitted to the Florida bar in November of 2011. That very same year she officially opened the Bennett Law Center.

During law school she was the vice president of the Black Law Student Association for one term and the 2009 recipient of the Florida Bar Association’s Young Lawyers’ Division Scholarship. Prior to moving to Lake County, Bridgette lived in Washington, D.C. for about 10 years and received her Bachelor of Arts in English and Government from Georgetown University in 2000.

Allison C. Williams, Esq., is The Law Firm Mentor.  Law Firm Mentor is a Business Coaching service for solo and small law firm attorneys.  It helps lawyers to grow their revenues, crush chaos in business and make more money.  Law Firm Mentor was born out of Allison’s experience starting a law firm and scaling its revenues into a multi-million dollar business in only three years.  She shares her extensive knowledge of business, mindset coaching and entrepreneurship alongside her team in Law Firm Mentor.

Allison is also Founder and Owner of the Williams Law Group, LLC, with offices in Short Hills and Freehold, New Jersey.  She is a Fellow of the American Academy of Matrimonial Lawyers, is Certified by the Supreme Court of New Jersey as a Matrimonial Law Attorney, and is the first attorney in New Jersey to become Board-Certified by the National Board of Trial Advocacy in the field of Family Law. Allison is a member of the New Jersey Board on Attorney Certification (NJBAC) – Matrimonial Committee, a New Jersey Supreme Court committee that determines eligibility of candidates to be certified as a recognized practitioner in the field of matrimonial law.

Allison is an accomplished businesswoman. In 2017, the Williams Law Group won the LawFirm500 award, ranking 14th of the fastest growing law firms in the nation, as Ms. Williams grew the firm 581% in three years. She won the Silver Stevie Award for Female Entrepreneur of the Year in 2017.  In 2018, Allison was voted as NJBIZ’s Top 50 Women in Business and was designated one of the Top 25 Leading Women Entrepreneurs and Business Owners. In 2019, Allison won the Seminole 100 Award for founding one of the fastest growing companies among graduates of Florida State University.

LEARN ABOUT
MY OUTCOMES

Connect with the
Law Firm Mentor